One of the Most thriving mobile market

324 million internet users in South Asia as of January 2015. (Source: Statistica 2015). In urban areas, mobile penetration has reached almost 100% and the continued growth is coming from semi-urban and rural areas, driven by cheap handsets, cheap connections and one of the lowest voice call charges in the world.  Mobile has brought about a silent revolution in this region. 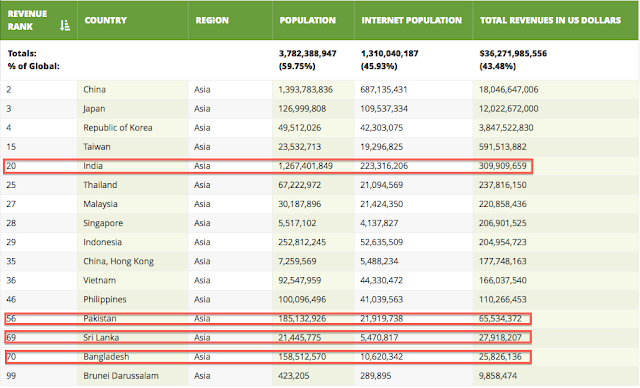 
With 135.7% CAGR towards 2016, India is rapidly expanding due to high mobile gamer penetration. Improvement of basic infrastructure will help India reaching $571.6 million by 2016, backed by 208.2million mobile gamers.

In a survey of 855 Internet Society members across South Asia, survey participants considered the persisting urban-rural digital divide, as well as the lack of multi-lingual, localised content as critical issues that must be addressed to further increase Internet uptake in South Asia.

Great localization will play a key role in driving up gaming engagement and ARPU across South Asia. On the other hand, western game developers aiming to break into the region will be best served by partnering with their South Asian counterparts who understand the local cultural mores. The sign has already beginning to show, as the famous mobile game "Cut the Rope" was re-published to China by partnering up with a Chinese publisher and now they are eyeing on India to bring the game here.


Credit card penetration is still very low in Bangladesh, India and Pakistan. As a result mobile banking and operator billing the viable option for directly monetising from mobile apps/games. Good news is people are getting used to mobile banking more and more. Only in Bangladesh the number of registered customers is 2.07 crore, according to the Bangladesh Bank website.

Following is a report of mobile game/apps ARPPU revenue ($) through carrier billing in South Asia: 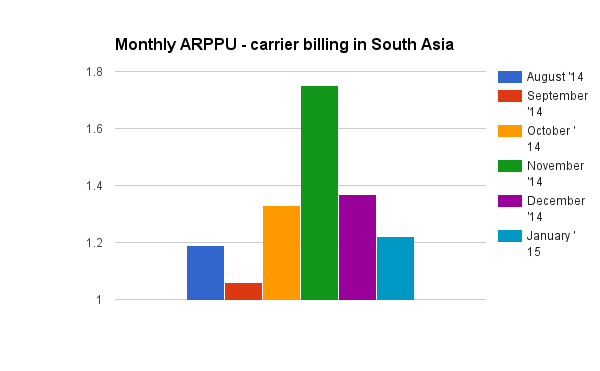 South Asia is an excellent opportunity for mobile games. In here countries like Bangladesh allows 100% foreign ownership of companies and five year tax holidays for new technology startups. Number of game companies is still at the low end, however the competition is rising slowly. There are significant opportunities for new players and investment in mobile advertisement and mobile games.
Posted by AKM Masuduzzaman at 1:29 AM